Skip to content
The Shack is now open. come down and try out our fresh local menu!  Check out this article from newdsay .

Since the recession in 2008, many new Long Island restaurants have gotten a start in one of two ways: Restaurateurs have cast aside fine dining ambitions to open eateries that serve shareable dishes and glorified burgers. Another group has set up aspirational spots on a comparatively shoestring budget in no-frills buildings.

Samy Sabil of Morocco and Ryan Flatley of Southold fall into the latter. A sommelier and a sous chef, respectively, at North Fork Table & Inn in Southold, the two left the renowned restaurant in 2011 to start Creative Courses Catering. As they built a clientele, they considered their next move and found potential in a former tool shop for Cessna airplanes in Southold. Starting in 2014, their off-hours were spent rehabbing the building, installing a floor, insulation, a kitchen and a counter. 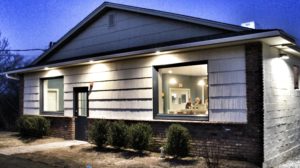 Serving a brothy clam chowder kissed by thyme and a dynamite fish sandwich bound to become an East End favorite, The North Fork Shack opened in April, its bare-bones interior painted a robin’s egg blue. Pendant lighting is reminiscent of an ice cream parlor and indoor picnic tables bring outdoor sensibilities inside. For now, it’s walk-up ordering and no outside seating, unless you have a towel and want to lounge on the grass.

Above a window with a pass that looks into the kitchen, a giant chalkboard displays a menu sectioned by categories, from “Starters,” to “Chowder & Co.” (soup and salads), “The Maine” (main courses), “Gulf Winds” (tacos and tostadas) and “Why Knot” (sides). Kids’ dishes are listed under “Guppies,” and a little board to the side lists specials.

Sabil and Flatley are cooking up satisfying dishes, simply prepared, with a handful of standout ingredients, such as fish so fresh it can be astonishing, along with produce from places such as Sang Lee Farms down the road. They may or may not namecheck them on the menu, but they don’t really need to because you can taste the freshness.

Take that clam chowder, chock full of Little Necks that seem as if raked from the water hours earlier. The New England-style chowder is studded with the trinity of carrots, celery, onion, bacon and a handful of fingerling potatoes. The local cod sandwich is as fresh, the fillet brushed in egg and rolled in salted breadcrumbs, then fried. Its sesame roll wears a perfect Romaine leaf and barely a sheath of Old Bay aioli.

A Greek staple, tomato, cucumber and feta salad, shows off boldly seasoned, perfectly matched cuts. Lucky for us, it doesn’t taste made-ahead and it’s not too cold. (I’m a fan of room-temperature salads for fuller flavor.)

A fine translation of another Mediterranean classic, the grilled calamari doles out coins of fingerlings scattered among scallions and olives. And the pulled lamb serves as a subtle reference to Sabil’s hometown of Casablanca, with its high acid, chermoula, pickled vegetables, a dollop of seasoned yogurt and a handful of greens.

Quinoa salad is a go-to for vegetarians, layered with sliced avocado, animated with olives and dried pomegranate over greens. The SLT is an alternative, a sandwich with shiitake mushroom, lettuce, tomato and avocado, with or without the garlic lemon aioli.

You may not think you need a salty chocolate chip cookie or a lemon cupcake with pistachio buttercream, but you do — their unusual flavor combinations are made by an expert hand.

Turns out the freelance baker is Rachel Cronemeyer Flatley, Ryan’s wife, head of sweets for Nick & Toni’s in East Hampton. She rounds out the team at The North Fork Shack, an ambitious yet affordable restaurant that, with peak summer on the horizon, is ready for takeoff.